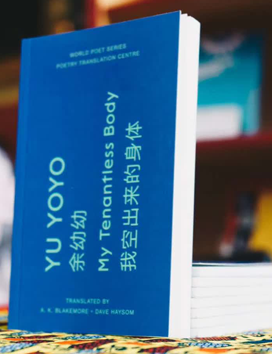 Yu Yoyo’s poetry exists in a place of darkness punctuated by gleams of moonlight and the burning tips of cigarettes. A place where nature is violent: mountains ravenous, sunsets suicidal, waters hostile. Where human presences remain indistinct, sometimes reduced to a role (mother, father, lover) or a selection of disassembled body parts, sometimes summoned as an anonymous addressee, sometimes spliced with trains, ships, and machinery. Sex happens in the shadow of the ultrasound room, the uterus, the umbilical cord; youth is the fleeting thrill of late nights and hard drinks, but old age can only be put off for so long. Most of these poems were written over the last few years; some appeared in Yu’s 2016 collection Me As Bait, and one or two date back to Yu’s debut Seven Years (a collection of work written between 2005 and 2011). In the world of Chinese literature, authors are generally divided into cohorts bracketed by the decade of their birth, and — because she happened to be born in 1990 — Yu was drafted into the vanguard of the “nineties generation” by default. Her early works were often treated by critics less as actual poems and more as artefacts of precocity, testaments to the astonishing miracle of a fourteen-year-old girl producing verse — a narrative that she confronted head-on with her choice of pen name: Yòuyòu, meaning youthful or immature.

Taken from the introduction to My Tenantless Body by 余幼幼 Yu Yoyo, co-translated with A.K. Blakemore. Available from the Poetry Translation Centre.